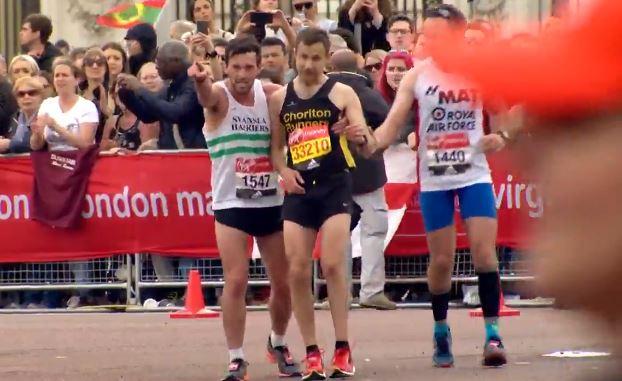 One of the defining moments of last year’s London Marathon happened when David Wyeth started to collapse just 300 metres short of the finish line.

Another runner called Matthew Rees, set aside his own ambition on finishing at a personal best time, choosing to stop and help this total stranger get back on his feet and with their arms around each other, the two runners managed to cross the finish line together.

This story made the national press and news headlines. It was said that the pair “captured the essence of what true sport should be.”

Few I’m sure would disagree with that comment, especially when we consider the selfish world that some overpaid sport stars live in. With their over inflated egos and where written contracts seem to mean absolutely nothing these days and ‘your word being your bond’ certainly is a thing of the past!

Matthew Rees commented “I thought, forget my sprint finish and I just went to help him (David Wyeth) get over the finish line, so I got him up and told him that we were going to make the finish.” That kind of selfless determination is so admirable and refreshing and Matthew should be rightly commended for it.

Stopping to help someone that was a total stranger in a time of difficulty and need actually reminded me of the story the Lord Jesus Christ told concerning the Good Samaritan, recorded in the Gospel of Luke Ch 10 v30-37.

This story emerged out of a conversation between the Lord Jesus and a lawyer, a man who was an expert of the Jewish law at that time. Jesus was asked “Who is my neighbour?”

The story was that a robbery victim (almost certainly a Jew), lay half dead on the Jericho road. He was by passed by a Jewish priest and a Levite (a priest’s assistant) who refused to help. Instead it was a hated Samaritan who came to the victim’s rescue. He applied first aid, took him to an inn and made provision for his care. To the Samaritan, a Jew in need was his neighbour!

Just as Matthew Rees has been rightly commended and will be remembered for his selfless act of kindness in future marathons to come, so the Samaritan’s one deed of mercy in this Bible story has inspired sacrificial ministry all around the world.

”Never say that such ministry is wasted,” said the author WW Weirsbe, “God sees to it that no act of loving service in Christ’s name is ever lost.”

It all depends on our outlook in life. For those who want to follow the words of the Lord Jesus, then what he said to the lawyer applies to us today – “Go and do likewise.”

Incidentally both runners ran together later at the great Manchester run, in an act of solidarity after a terrorist attack in Manchester Arena.

Many other good Samaritans stopped on that horrific night and selflessly gave of themselves to help those in need. Such people help restore our faith in humanity.